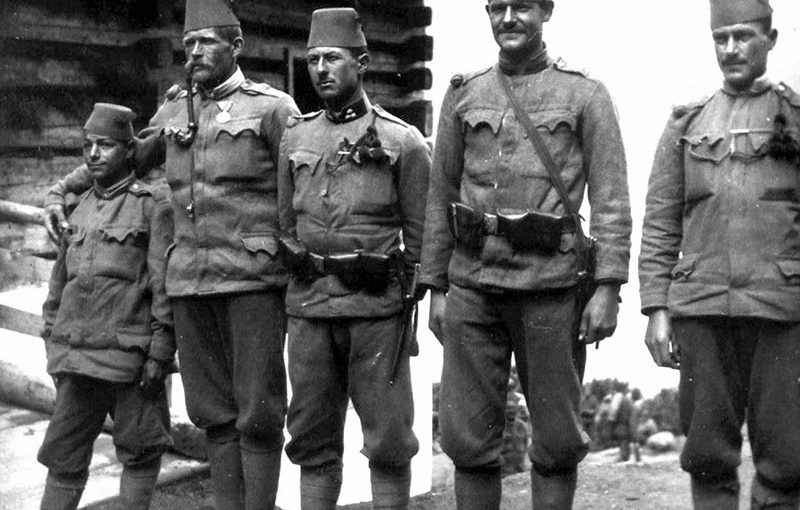 Although sanjak usually means any one of many Ottoman administrative units, one has become known as “the Sanjak.” Following the Treaty of Berlin the Sanjak of Novi Pazar became the symbol of a status quo strategy in the Balkans intended to prevent Serbia and Montenegro from merging. Although part of the Ottoman Empire until 1912, Novi Pazar had an Austro-Hungarian military presence from 1879-1908. It was divided between Serbia and Montenegro in the course of the First Balkan War in 1912 and subject to an Austro-Hungarian occupation regime during World War One.

The Ottoman Sanjak and the Berlin Congress

In a narrow sense the term sanjak means nothing more than an Ottoman administrative unit which was part of a vilajet, a province and the administrative unit directly under the Porte. The administrative (and sometimes military) head of a sanjak was the mutesarif. Throughout the 19thcentury many parts of South East Europe still belonged to the Ottoman Empire and were therefore organized as such.

Nevertheless, there was one sanjak which became known as “the Sanjak.” This Sanjak first became known internationally when its future was discussed at the Berlin Congress in 1878. This gathering of the great European powers decided the outcome of the Russian-Turkish/Ottoman war and, therefore, the future borders of South East Europe. Austria-Hungary backed by a European mandate from Berlin then occupied Bosnia-Herzegovina. Nevertheless, there was a huge discussion about the so-called Sanjak (which bordered Bosnia-Herzegovina in the South and was formerly part of the vilajet Bosnia). The Sanjak was given this importance for several reasons: on the one hand it was seen as a zone preventing the merging of Serbia and Montenegro; on the other, it was the last area connecting the Ottoman Empire with occupied Bosnia-Herzegovina. The Sanjak also became a symbol of a status quo policy, a strategy for the Balkans which aimed to guarantee the borders for which the Berlin Congress had set ground. From the Serbian side this area was called old Serbia, “the Raška,” and was connected to the Kosovo polje myth where the Serbian army was defeated by the Ottomans in 1389.

Beside the right to occupy Bosnia-Herzegovina, the Berlin Congress gave Austria-Hungary the right to hold troops in the Sanjak and to build a railway line. This created a situation in which Ottoman and Austro-Hungarian troops shared the same garrison towns and performed border guard duties together.

The Sanjak of Novi Pazar as it was mentioned in the Berlin Treaty ceased to exist just one year after the Habsburg troops entered it: in 1880 the whole region was reorganized. Austria-Hungary sent troops only to the northern part which directly neighboured Bosnia-Herzegovina. This part became a sanjak in its own right and was named after its main town, Sanjak Plevlje (today: Pljevlja) or Taşlıca in Turkish. A much smaller part was then named Sanjak Novi Pazar. Both became part of the newly formed vilajet of Kosovo. It is also important to mention is that Austria-Hungary never sent troops to the town of Novi Pazar between 1879 and 1908.

Beginning in 1878, the Sanjak of Novi Pazar[1] became a symbol of the Balkan region as a whole. It was inhabited by Serbs, Montenegrins, Albanians, Turks and Slav Muslims. It was influenced by its border status in which small-scale combatants, whom Habsburg sources call bandits, crossed borders constantly. There was also constant migration: Bosnian-Herzegovinian Muslims fled from the Habsburg invasion in 1878 and Muslims from Montenegro. The Orthodox population of the region often migrated to Serbia.

The Austro-Hungarian presence in Sanjak Pevlje consisted of about 2,000 soldiers and a consulate in Plevlje, a region which had only about 40,000 inhabitants (half Muslim and half Orthodox). The bulk of the daily work of the Habsburg troops was connected to the organisation of garrisons and improving quality of life (e.g. building of streets and steady water supply). The Habsburg Army also ran a military post from Bosnia-Herzegovina but the railway line was never built. Living conditions were largely peaceful: more soldiers died because of floods, diseases and by accident than of hostile actions by the population. In moments of unrest, the Habsburg troops increasingly worked together with the Ottoman troops. This collaboration was also applied to the suppression of Serbian national propaganda.

As in the other garrisons of the Habsburg monarchy, alcoholism and prostitution posed a problem in Plevlje. Although forbidden, many officers brought their families to the Sanjak which resulted in the creation of a primary school which children of the local elite also attended.[2]

While Habsburg representatives changed constantly, the highest Ottoman representative remained virtually the same throughout the almost thirty years of Habsburg presence. This was Suleiman Hakkı Pasha (1862-1918). Unlike in other sanjaks, he had the right to interact directly with the Sublime Porte without going through the vali (the head of the vilajet) as was customary.

In 1908, the Habsurg Empire decided to leave the Sanjak. It is often said that this was entirely due to the annexation crisis. However, the Habsburgs already found that their position in the Sanjak had become more difficult. In the summer of 1908, after the implementation of the constitution in the Ottoman Empire, when the Young Turks gained more power, it was reported that the internal Ottoman political situation in the Sanjak had become too nebulous. The Habsburg representatives reported that they no longer knew whom they could trust. In particular, the Young Turk followers among the Ottoman Army officers became more and more hostile to the Habsburg presence and the mutessarif. In the end, mutessarif Hakkı Pasha fled to Austria.

On the Habsburg side, the experience in the Sanjak became a key element of shifting perceptions about the Ottoman Empire and Balkan nationalism. The Ottoman Empire had became a presumable ally threatened by challenges comparable to those in Austria-Hunary while the liberated Christian population had become threatening to the Serbs. Certainly, the Sanjak experience also set the ground for the personal prejudices of officers who served there (e.g. the recognition of the Sanjak in 1879 was done by Franz Conrad von Hötzendorf (1852-1925) who later became general chief of staff).[3]

When Austria-Hungary left the Sanjak in 1908 it remained only for a short period under exclusive Ottoman rule. In the course of the First Balkan War it was split between Serbia and Montenegro along a border which still exists.

During the First World War it was occupied by Habsburg troops; the eastern part became part of the military governorate of Serbia, the other of Montenegro. The Habsburg regime in particular sent officers who already served in the region prior to the First World War. An occupation policy was implemented which preferred the Muslim and Turkish population over Orthodox Montenegrins and Serbs for several reasons: the Serbs were seen as the cause of the war, while the Muslims and Turks were conceived of as reliable (it was reported that they supported the k.u.k. troops) and the Ottoman Empire had become an ally.[4]

Today the border created out of the First Balkan War in 1912 still exists. However, the inhabitants of the towns changed severely in some cases. The Muslims of Pljelvlja now no longer constitute half of the population but rather around 17 percent (according to the 2011 census). Throughout the interwar period until today there have been different political actors with diverse plans for the future of the Sanjak such as autonomy inside Yugoslavia or a merge with Bosnia-Hercegovina.[5]

Reviewed by external referees on behalf of the General Editors

This text is licensed under: CC by-NC-ND 3.0 Germany – Attribution, Non-commercial, No Derivative Works.